It is a "geological anomaly" without equivalent in the west of France. This geological site contrasts with the surrounding hedged farmland with soft lines and gently sloping slopes. The river has carved out a characteristic canyon of limestone layers comparable to the causses of the southern Massif Central and vegetation unusual for western France: moors and dry grasslands, boxwood and juniper .   The Canyon de Saulges offers very beautiful walking or hiking routes in an amazing natural heritage.  The site offers several climbing walls recognized by the National Mountaineering Federation. VISITING TIPS FOR THE CAVES * Reservation is strongly recommended, call +332 43 90 51 30 * Go to the Prehistory Museum reception desk 30 minutes before the start of the visit to collect your tickets. * Claustrophobia: beware, passages may be narrow and low ceiling. * Bring warm clothing and good shoes. 16 kms from the Manor (approx. 20mn)

Discovered in 1987, the Gallo-Roman Baths of Entrammes owe their remarkable state of preservation to the fact that they were supplanted by a church from the end of antiquity.  Thanks to this protection, extremely rare vestiges have been preserved. There are 8.50m high Roman walls, four enfiladed bathrooms heated by hypocaust, brick arches and windows, as well as evidence of the religious occupation of the site. (ambo, sarcophagus, bell moulds). So many treasures that are revealed during a remarkably illuminated visit. 17 kms from the Manor (approx. 20mn)

Welcome to the land of the Coëvrons, in the heart of the magnificent hills of Coëvrons, in a land of history, where you will discover a natural and historically exceptional panorama. Without forgetting the festivals, the animations and all the activities of hiking and climbing, all year round. Visit one of the Most Beautiful Villages in France perched on a rocky peak and its sumptuous panorama over the Erve valley, the Charnie forest and the Coëvrons hills . 19 kms from the Manor (approx. 20mn)

A city of art and history, Laval was born with the Year 1000. A castrum built on a rocky spur overlooking the Mayenne. Today you can visit its dungeon dating from 1220. The castle houses the naive art museum which pays homage to the customs officer Rousseau, a native of Laval. Alfred Jarry and his Ubu Roi, Ambroise Paré and modern surgery, Alain Gerbault and his sailboat, are also from Laval. Another visit to Laval, the city of milk, the lactopole. 20 kms from the Manor (approx. 20mn)

Jublains the city of the Diablintes  Come and discover the temple, the fortress, the Roman theatre, the thermal baths and the archaeological museum. All this original heritage that makes Jublains one of the first tourist sites of the department.  The fortress is the most spectacular part of the Jublains site, and also the most enigmatic, as it is unique in the Roman Empire.  For a long time it was thought to be a legion camp, a hypothesis that has now been abandoned. It is thought to be a fortified warehouse, which may have been converted into a military fortress in the late 3rd century. 27 kms from the Manor (approx. 25mn)

An animal shelter The "Refuge de l'Arche" was created forty years ago. It exclusively takes in animals that have been mistreated, illegally traded or abandoned by unscrupulous masters. Here the animals are not selected because they are the most tender for children or the most extravagant, but because they have a history, often chaotic, sometimes unusual. 33 kms from the Manor (approx. 35mn)

The manufacture of "Toiles de Mayenne", a jewel in the crown of the furnishing textile industry since 1806, allows you to discover the quality of the finished product and its exceptional know-how. (Shop on site) Situated in Fontaine-Daniel, we then recommend a walk in this charming little village nestled in the greenery of the Salair woods.  Note that the "Earth Festival", at the beginning of September, is the only opportunity to visit the factory and the Cistercian abbey.

In 1962, the Mayenne artist Robert Tatin, having returned from his many lives and travels, bought with his wife, a small old house at the place called La Frénouse in the commune of Cossé le Vivien. He imagined his "Maison des Champs", a monumental work anchored in nature, a crossroads of civilizations, a bridge between East and West and the bearer of a universal language. From 1967, and for 20 years, Robert Tatin transformed the communal path that led to his creation into an "alley of giants": 19 statues retrace his discovery of the world and his artistic journey. 36 kms from the Manor House (approx. 40mn)

The medieval castle of Lassay is composed of eight massive towers, a unique barbican, a drawbridge, all set on the water's edge in a green setting. It is said that the site and the story of Saint Fraimbault the evangelizer of Maine inspired Chrétien de Troyes for the character of Lancelot du Lac. 51 kms from the Manor (approx. 50mn)

The highest point in the west of France is in Mayenne! It's the "Mont des Avaloirs" at Pré-en-Pail Saint-Samson which culminates at 416 m. And yes! In the heart of the Normandy-Maine Regional Natural Park, climb to discover the most beautiful hills and forests of the far west. From there, in a particularly well-preserved nature and punctuated with magnificent places, many hiking trails start out through hills and forests. 60 kms from the Manor (approx. 1H)

It was January 17, 1871, when France was defeated by Prussia. Prussian soldiers were arriving at the gates of Laval. That evening, for three hours, four children went to contemplate the one they called: "La Belle Dame". The Virgin Mary appeared to them, dressed in a blue dress strewn with stars, a black veil on her head and a golden crown edged with red, at the feet of blue slippers topped with a golden buckle. She holds out her hands forward and smiles at the children. The inhabitants of Pontmain, rushing to the barn of the Barbedette family, begin to pray. But only the children can contemplate the Virgin. As the prayer unfolds, a message is written under her feet. "But pray my children, God will answer you in a short time. My Son lets himself be touched." And then the children say, "It's all over!" The Prussians who were to take Laval did not enter. The next day, they withdrew. The armistice was signed on January 25. The 38 soldiers from Pontmain all came back safe and sound. On February 2, 1872, after the investigation and the canonical trial, the bishop of Laval published a mandate in which he declared: "We judge that the Immaculate Virgin Mary, Mother of God, truly appeared on January 17, 1871 to Eugène Barbedette, Joseph Barbedette, Françoise Richer and Jean-Marie Le bossé in the hamlet of Pontmain." 83 kms from the Manor (approx. 1h10mn)

details
Would you like more information about the department?
MAYENNE TOURISM 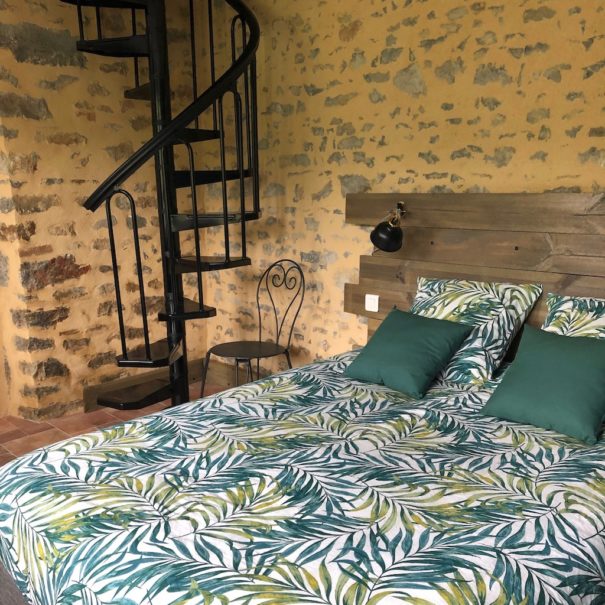 double bed on the ground floor, and 2 single beds on the first floor 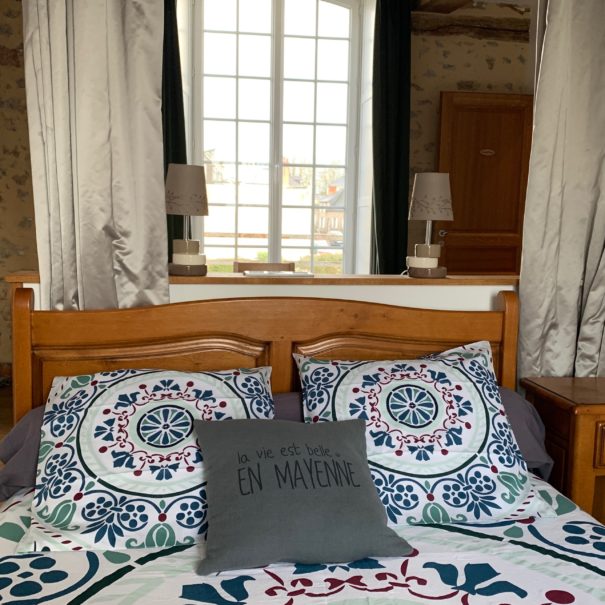 2 rooms, ideal choice for a family 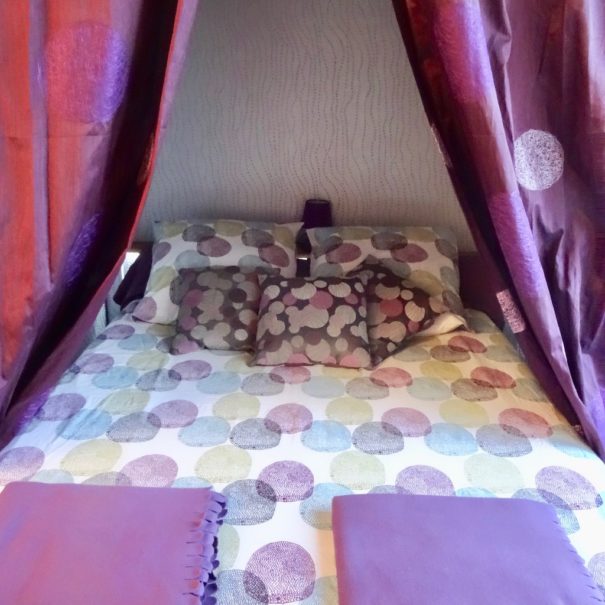 LESS THAN AN HOUR'S DRIVE FROM THE MANSION

LESS THAN 2 HOURS DRIVE FROM THE MANOR

ABOUT 2 HOURS DRIVE FROM THE MANOR

BETWEEN 2 AND 3 HOURS DRIVE FROM THE MANOR HOUSE